The Mardon dig  would not have been possible without the help and permission of landowner George Farr and other employees of Mardon farm. We had a clear route through the farmyard, places to park whatever the weather, access to water close by and, very importantly, quick responses to all my emails asking endless questions. We would like to pass on our thanks to all at Mardon and hope we were not too disruptive to the everyday running of the farm.

Once again we were delighted to have Richard Carlton from the Archaeological Practice, supported by fellow archaeologists Marc and Mike, to direct the dig. Everyone appreciated the support and help they received and the training given to newcomers and experienced diggers alike. As always there was lots of laughter which made our time at Mardon even more enjoyable. Thank you to all at the Archaeological Practice.

Our dig at Mardon ended on 30th September when all the remaining trenches were back filled. We were delighted to welcome 43 diggers over the two weeks we were open, including new diggers and new members. Our new inovation, the white Meet and Greet tent also had a fair number of visitors despite the terrible weather on our open day. A special thank you to all those helpers who came to give their support.

Behind the scenes of course is just as busy as on the excavation site. There are numerous people who have helped to set up the dig and who have taken on extra tasks to help make it happen. This included a 'pre dig' day, where we welcomed the community to Crookham Village Hall to explain what we had done in 2017 and 2018 and were planning to do on Mardon hill in 2021. There will also be a feed back day to report on our findings at a date to be arranged.

Lastly here are a few last-day photographs of what was achieved. It is too soon yet to have a report on the dig but this will be put on the website as soon as we can.

Once more we found round houses, confusing ditches, pottery, flint and areas of 'paving' and cobbling. There may never be a definitive answer to what life was like at Mardon 2000 years ago but this years dig will hopefully add a few more pieces to the jigsaw. 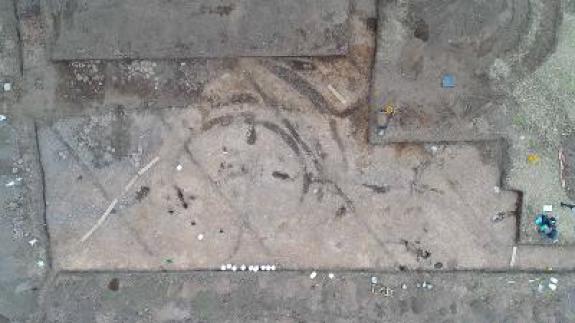 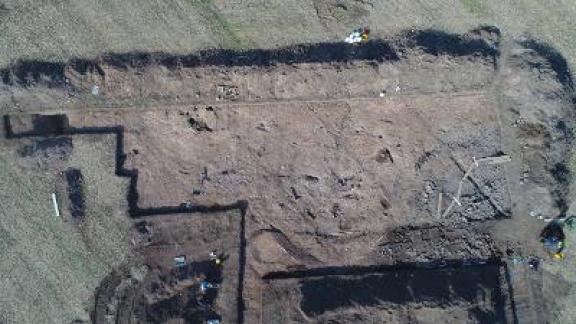 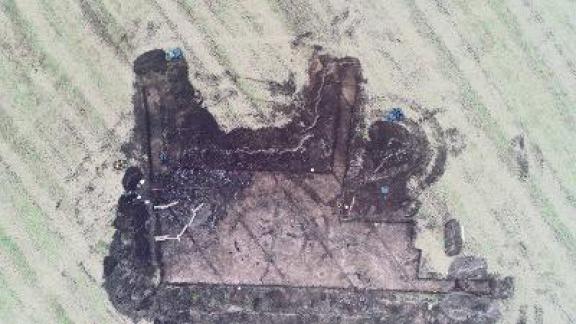 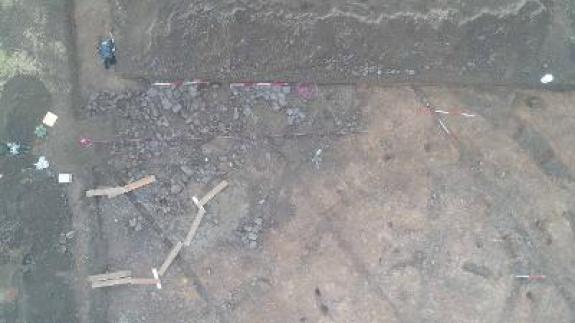 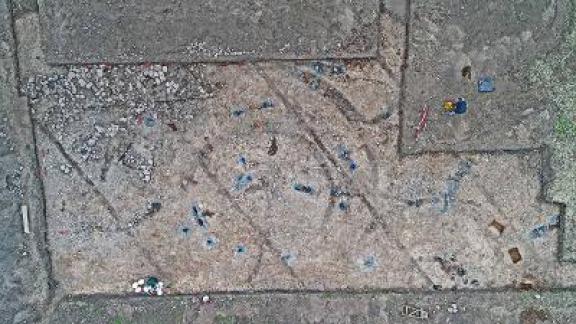 As you can see from the photographs below, the remains of the Barley Mill are in a dangerous condition and it is now fenced off from public access. However both TillVAS and Ford and Etal Estate would like to learn more about the history of the site. There has been a lot of archival research but some questions remain unanswered.

Victoria Smith-Lacey, Heritage Curator for Ford and Etal Estate, together with members of TillVAS, have been discussing ways to find the answer to one particular question; the whereabouts of the old mill lade. This would enable us to better understand the footprint of the mill and more about how it functioned.

Talks are ongoing but if Covid 19 restrictions permit, we are hoping to run small dig in the spring. This will need to be under strict safety guidelines and will take place only in one or two specific areas where people are not put at risk.

The Barley Mill has  been assessed by both archaeologists and a conservation architect.

Due to the serious instability of the structure, the site is NOT admissible to the public. 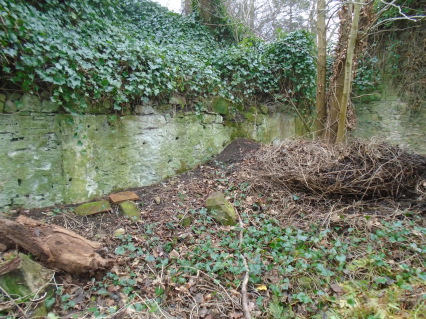 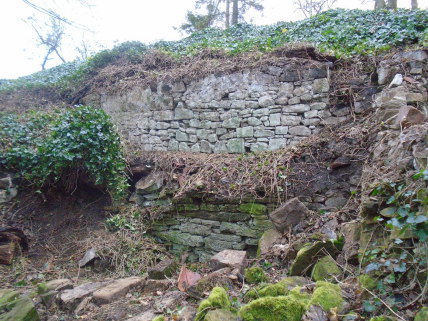 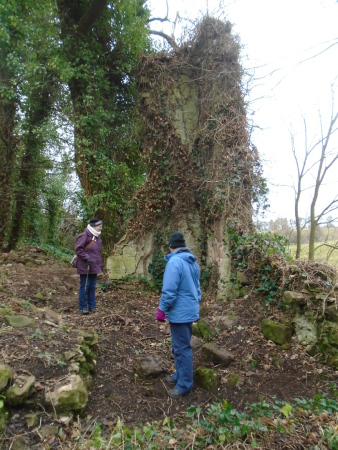 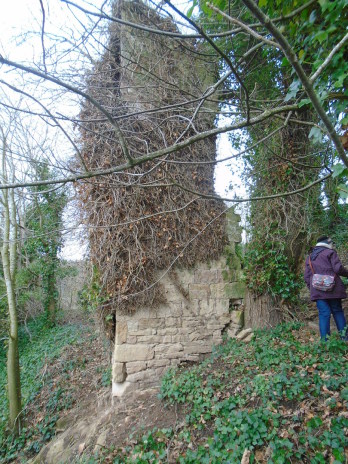 Members of the archaeology sub committee of TillVAS continue to explore interesting sites which could be investigated more fully at a later date. To this end members have been to the Barley mill at Etal to look at the remains there. Following a day of very hard work clearing ivy and clambering over stones a small team are about to return to and  clear more of the vegetation and establish the footprint of the mill.

Samples and artefacts were taken from Mardon for further ananlysis which has now been completed. The report is of course quite technical but the following is a brief summary of the story so far.

There is some evidence of domestic activity ie fragments of pot, traces of fired clay, animal bone and animal tooth enamel. There is also evidence of industrial, animal and human waste deposits in samples taken from the ditches. All indications suggest waterlogged conditions  on the site.

A wide range of flora and some small fauna (ie beetle exoskeletons) was identified, again the former of a variety associated with damp conditions. Some small wood samples were identified as willow and their growth rings suggest the growing conditions were good. Other tree varieties were identified in charcoal samples. Weed seeds preserved by both charring and the waterlogged conditions suggest nutrient rich soils or manure heaps.

There was some indication that emmer wheat had been grown on site. Spelt wheat and 6-row barley are generally used as the main cereal crops during the iron age but some sites in North Northumberland have indicated a preference for emmer wheat.

Larger animal bone deposits were from adult cattle, sheep  and possibly  goat. One particular deposit of burnt sheep or goat bones may be the remains of a specific episode of consumption.

Further work to find more animal remains would be of value to the understanding of iron age sites in the area. 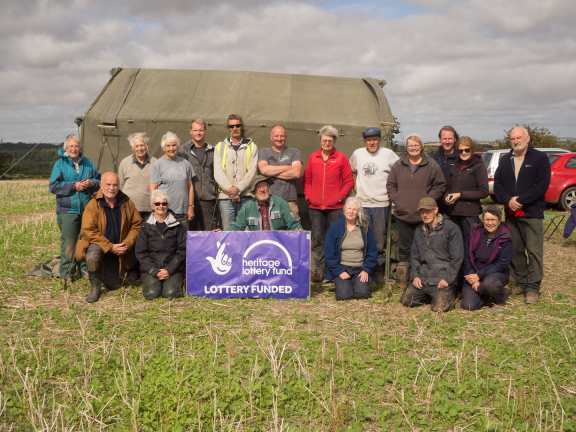 As part of the “Branxton and Crookham Village Atlas Project” begun in 2016 and supported by the Heritage Lottery Fund, TillVAS (Till Valley Archaeological Society) planned an excavation within the designated area, and after a great deal of research by  the Archaeology Group and using aerial photographs, a site near Mardon, possibly Iron Age, was chosen.  The farm is owned by Mr. and Mrs. George Farr of Pallinsburn House.

Permission was requested to dig up an arable field and this was granted on the condition that it was completed by early September, when it would be sown with winter wheat, leaving quite a short window in among all the other TillVAS activities.

Preparations were made under the supervision of Archaeologist Richard Carlton and despite the fact that geo-physics showed very little of note, the excavation began on 31st August manned by up to seventeen volunteers from as far away as Morpeth.

Only one wet morning interfered with the work and once the top soil was removed by digger the potential of the site became apparent.   A number of trenches were opened including two over probable ditches, one of which, although below the modern field drains, contained certainly two springs of clear running water.    Several pieces of Iron Age pot were found and few worked lithics in the trenches.

The widest ditch became very deep and reinforcements in the shape of three brawny lads were called in to help.   As a result of their labours the ditch continued to a final depth of about 1m 75, and towards the bottom began to produce definite evidence of Iron Age occupation; first – shards of pot, then pieces of wood, and a very ancient piece of bone.   Then finally, a section of vertebrae and two shoulder blades, all much too big to be human, and which could possibly have been used as digging tools by the original diggers of the ditch.

The excavation closed on Saturday 9th September and everyone involved were happy with the outcome, and the camaraderie of the site, despite the sore knees and aching backs.

Our special thanks must go to Mr. and Mrs. George Farr for their support and all the volunteers who gave up their spare time and effort to achieve a worthwhile result.   We may return in 2018, so watch this space. 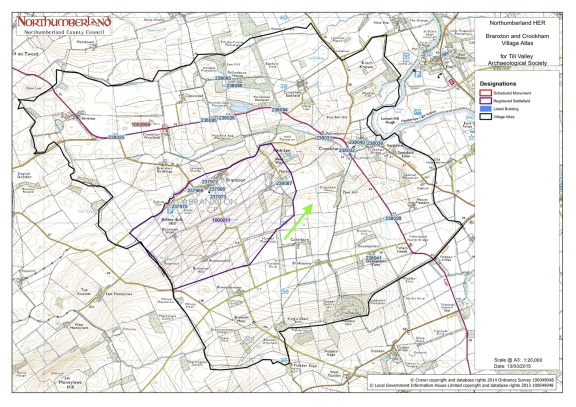 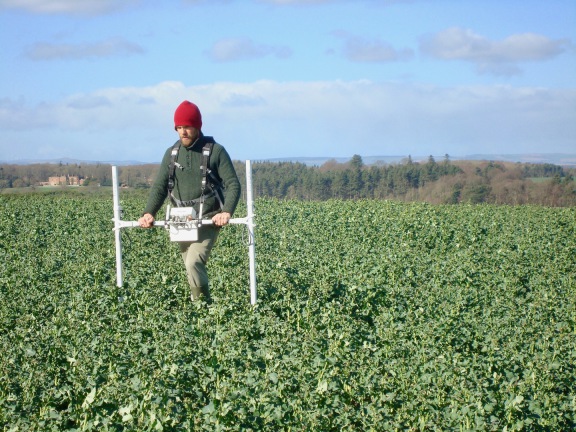 Now that the Flodden 500 Project has ended, we are into a new era. We will no longer have the benefit of the Flodden 1513 ‘umbrella’ for helping to finance certain expenses and enabling us to take part as volunteers in archaeological excavations financed by the Heritage Lottery Fund.  However, the TillVAS committee is determined to take a pro-active approach and to do all that it can to ensure that archaeology continues in our cross-Border area with opportunities for volunteering by TillVAS members. We are fortunate in already having in place our own Heritage Lottery funded project for the Branxton & Crookham Village Atlas with a major excavation, test-pitting, fieldwalking and metal detecting all taking place during 2017.

This will provide a ‘cushion’ whilst other possible projects are being considered for the future. Our contacts with professional colleagues and supportive estate owners give us confidence that there will be projects coming forward. Some of these may not need substantial financial input if, in large part, we are able to draw upon our own resources in terms of volunteers and the considerable range of TillVAS equipment, although we will always need a professional input. Other projects may require grant aid but this will be a challenge which we will face at the time, as we did when obtaining funding for the Branxton & Crookham Village Atlas. We will also be able to take part in projects funded by other organisations, e.g. the Peregrini Landscape Partnership excavations at Lindisfarne and the Lennel Kirk excavations in Coldstream.