This is a new section to allow members to contribute short articles, poetry and relevant photographs of an historical or archaeological nature.

Please use the Contact page to say that you have a contribution and the website manager will get back to you.

The Lindisfarne Peregrini excavation on The Heugh at Lindisfarne attracted my attention, but because of holidays and important work near home, was unable to go until the site was about to close down.   However, on a nice sunny Saturday I went for a preliminary look, to find there a number of TillVAS members and friends all very busy amongst the foundation stones of the chapel  under the direction of Richard Carlton and Paul Frodsham the archaeologists.   While watching, my trowelling hand began to itch, and after taking a few photos, resolved at least help to clear up.

The following Tuesday after some rather poor weather my friend Heather & I duly set off at the appointed time (the tides restrict access to the island somewhat) but on arriving found the site unworkable and we returned home.   I did eventually get some working days,  trowelling at the east end in case there were signs of burials and re-laying some of the turfs (and there were turfs & TURFS).   There were stones to move, the most worked stones were photographed and kept to one side for further examination.   These were BIG stones, sometimes only one filled the barrow and made wheeling a bit uncertain.

The numbers of volunteers had dwindled at this late stage, as the excavation should have been closed by this time, but there was always a few of us to keep the work going.    There usually had to be somebody on Public Relations duty as the foundations of the chapel were still exposed and the visitors passing by on the footpath had innumerable questions, were most interested, and listened attentively to explanations.   There were quite a few visitors from  abroad, holidaying in Edinburgh, Bamburgh and elsewhere, who had seen reports in the media and wanted to see for themselves.

Then it was backfilling time, but arrangements had been made for a digger to shift the huge piles of soil and stones.   Everyone likes diggers, both at the beginning and the end of digs!

Firstly though, the foundations were covered with a black sheet which tended to blow away  unless held down with boots, to prevent damage by stones which were carefully placed.   Then the soil was gradually moved from the heaps  and carefully spread.   Eventually all was in place, the remainder of the turfs built into low banks to mark the outlines of the chapel, or spread on the interior to hopefully grow back into the grassy cliff top.

Most of the time here, the singing of the seals was quite audible and every day a little pied wagtail worked alongside us, gobbling up anything edible.   The swallows swooped below us under the cliff and there were boats of various kinds, a beautiful yacht one day, and one morning when we arrived, some unfortunate had run aground on a sand bank and the boat sat high and dry waiting for the next tide.

On the last day, the rain returned and it was waterproofs again, but we were finished by lunch time, although we had to wait for the tide to turn before we could leave the island.

I will go back if the site is reopened in the future (and if I’m spared!).  Once a digger, always a digger. 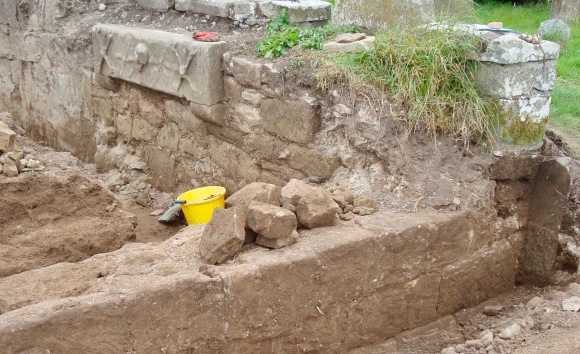 A Mysterious Stone in Lennel Kirk

The kirkyard has come to life, it has lost its solitude. The living have intruded on the dead, but now the dead are no longer so anonymous. Tenacious and empathetic men have recorded the memorials and those who left the living world so long ago have been brought back from obscurity and into the present.

Lennel Kirk is naked now, stripped bare. The vegetation which clothed and softened the starkness of the ruins has been pulled away from the walls. The rank plants and tumbled stones that covered the earth floor, raised up over time, were shovelled away from within the roofless interior by willing hands before a small mechanical digger arrived to assist the process. Mattocks and shovels followed, probing tools searching the kirk for its secrets. The human excavators set to work with questing curiosity and excitement, biting into the bare earth, the surface accumulated over the last two hundred years of lonely neglect. The heavy work of moving rubble into wheelbarrow after wheelbarrow and trundling it away to be tipped against the surrounding kirkyard wall, failed to dampen the enthusiasm of the eager toilers. Interesting carved, and worked stone came to light, to be carefully stored for future reference and detailed study. Some of these were beautiful­–ecclesiastical treasures that honoured God, graced the interior and had given pleasure to those vanished congregations.

From above, one stone in particular manifested itself as a simple oblong object set flush with the surrounding earth. The diggers gazed down on it; was it a part of a floor? Was it part of something else? It wasn’t until the remorseless, unremitting scrapes of trowel and shovel uncovered it fully that its true external nature was apparent. A worked rectangular block of stone with, carved on its side, the image of a skull. On either side of the skull were crossed bones and some carvings, perhaps representing masons’ or workmen’s tools. The stone was set into the internal face of the north chancel wall, supported on either side by two carved corbels. But what was its meaning? What did it represent? Who was it for? Was it a lintel supporting a vanished door that had been, perhaps, an entrance to a vaulted tomb? Had it come from somewhere else? What stories were locked within its mute, inanimate existence?

Certain to say, though, that the touch of many hands hints at some shadowy emanations locked within the stone and evident to imagination; echoes from all those who were involved in bringing that object into useful life. To begin with someone had commissioned it, then came the quarryman who laboured with the pick to force it, in its raw undressed state, out of the bedrock where it had lain for aeons. Next came the carter who, with his horse, drove it away to be worked before it reached the hands of another worker, a mason who tooled the stone according to instructions from the builder or architect. Finally the labourers who placed it in the spot from which, however many centuries later, it was at last uncovered by the next workers in its story, the excavators. It is not the end of its history though as others puzzle over its purpose and meaning. It may seem just a stone, but it holds within it all those unknown lives, their hopes and fears and, in the end, as promised to all of us, the knowledge of certain death.